Can I have too much stuff, I don't need?

Well, today has turned into a day of not doing particularly anything due to snow which fell over night and continues to fall. So, I find myself with time to contemplate - never a good thing in my opinion!
So, what do I have to say for myself today and thus, what am I going to write!

I recently read a  post on the Oldhammer Forum  - that one of it's members had collected over a thousand Orc and Goblin miniatures. To which, I responded with a rather half-hearted - well done, for showing such dedication in collecting so many and how the real work now begins in painting them all. I've also read a recent rant on Mark H's Blog about The Fall of the Oldhammer Empire which has set my mind to contemplating my ever increasing collection and why am I doing this!


Thus, I've found myself looking at my own collection of O&Gs and consider my own purpose in having such a large collection of unpainted miniatures (I also, have in the region of a thousand unpainted O&Gs, I'm sorry to say!), made up of various Pre-slotta C' series, Marauder, Citadel and Asgard etc. most are all "classic" miniatures in their own right, collected over the last thirty plus years. But, I balanced this out in my own mind by the painted O&Gs in my collection, for which - I've been described as having 'more Orcs than Sauron', I jest not.
How did I get to this - simple, over the last thirty years or so I've played a game or two and has the rules and my thoughts on how I wanted to play the game have changed I've added units, put others aside, and not developed ideas as far as I originally intended - thus my collection has grown or I simply liked the miniatures - the Asgards O&G's are some of the best miniatures I'm ever likely to have, but, in my opinion - my style of painting does not suit them - they simply look awful and I'd be embarrassed to put them on the table! So, I keep them - just to admire their design and hope that one day, I might consider my meager talents with a paint brush worthy. 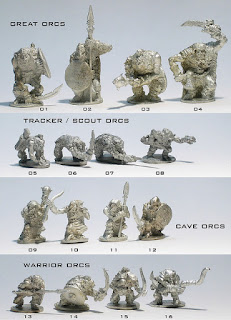 (Apologies, I don't have the reference for the picture)

Now, dear reader you're asking yourself - this is all very self adsorbed and I'd like to be in such a position. Well, consider this, I'm also in the position of having in my possession - other miniature armies which I'd like to develop and play a game or two with. But, to be honest - I'm depressed by the thought of the task, as I have this dark cloud on the horizon of the unpainted O&Gs that am ever likely to get on a table large enough apart from the BIG games at BOYL. Hence, I'm doing nothing with any of it - but moving figures from one box to another as I break the whole into what I think are manageable chunks. So, what I'm say is - Is having too much stuff a good thing?